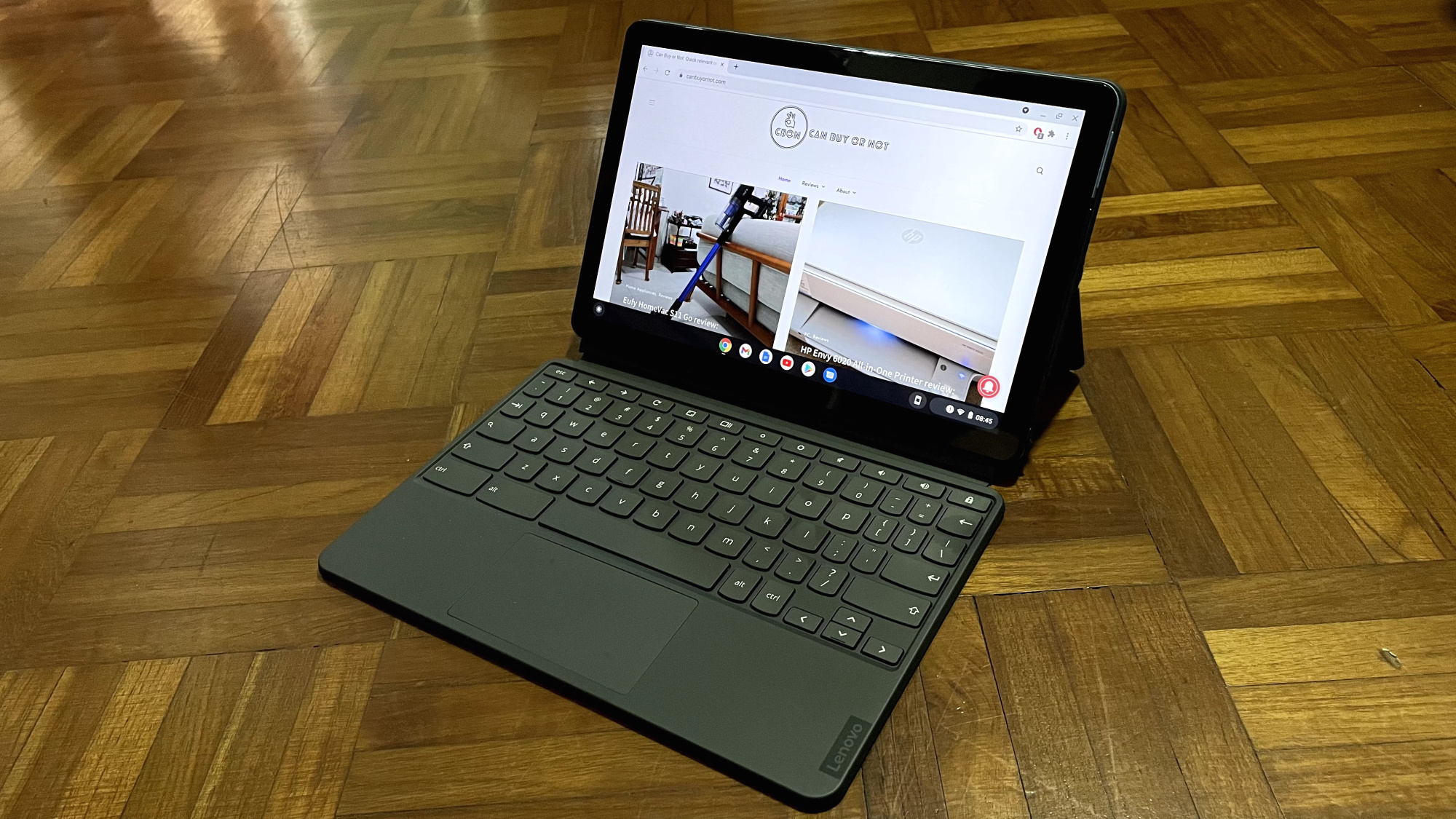 The Lenovo Chromebook Duet is a 2-in-1 convertible like the Microsoft Surface Go 2. It works as both a tablet and a laptop. But it runs Google ChromeOS instead of Microsoft Windows. The Duet is also more affordable. It costs around S$300 for the 64GB model from Amazon (US set), while a 128GB local version is available from Lenovo Singapore and Challenger at S$499. In comparison, the Surface Go 2 starts from S$618.

Unlike the Surface Go 2, the Duet comes bundled with a detachable keyboard. While this keyboard is usable, it feels cramped because of its 10-inch size. I was pecking at the keys at the start. The Backspace key is also smaller than usual, which causes plenty of typos initially. I managed a dismal 40 words per minute in a typing test compared to my usual 60 to 70. Things did get better after using the keyboard for a while. The small touchpad, though, is pretty good for its size. It is smooth and clicky.

The Duet probably works best as a tablet. Without the keyboard, it weighs a handy 450g. The bundled fabric stand cover magnetically attaches to the back of the device while its adjustable kickstand lets you prop the Duet on your lap or desk. I was also impressed by the Duet’s glossy 10.1-inch IPS display. It is crisp and bright (400 nits) with good viewing angles. The screen bezels may not be the narrowest, but neither are they chunky.

Aside from the keyboard, one other downside of the Duet is that it has only a single USB-C port for both charging and data. Yes, there is no headphone jack, though Lenovo includes a USB-C to 3.5mm converter. It doesn’t help that the Duet’s speakers are terrible. They sound underpowered and soft at mid volumes and are overly harsh and strained at higher volumes. Unlike most Chromebooks, the Duet lacks a microSD card slot, so you’re limited to either 64GB or 128GB storage.

The Lenovo ChromeBook Duet runs on ChromeOS, which boots up in a jiffy. I particularly like ChromeOS’ ease of use. Updates are automatic and users can sign in to any ChromeOS device with their Google accounts to restore their installed apps and preferred settings. There is also Android app support (Google Play Store is available). And since the tablet uses an ARM-based mobile chip like Android smartphones, it can run most Android apps. Performance is generally smooth, but I don’t recommend having more than 10 open Chrome browser tabs. Battery life is decent. With the keyboard attached, the Duet lasted 5hr 23min with the screen brightness at maximum. In short, the Duet, despite some drawbacks, offers portability and great value. Perfect for younger kids and those looking for a secondary computer.

Cheap and portable 2-in-1 Chromebook.
Available at Amazon